First day of July, gorgeous blue skies, everything around me bursting with color, I love the Summer.

In keeping with my blog posts about all the amazing people in my world, I would like to introduce you to my friend Stephen Haggerty.  I met Steve through my Shakespeare Club, and when he told me that he wrote poetry, I was immediately intrigued.

Stephen has written his first book called COWS IN THE FOG, and I love it. I asked Steve if I could interview him for a blog post.  I told him that my blog was mostly for knitters and crocheters, but that did not bother him at all, he said that he would be “honored” how’s that for a real gentleman J

MH: When did you realize you had a gift for writing poetry?

SH: In general, I realized I had a gift for writing in grade school. My father was a musician editing Broadway Musicals at the time, and he encouraged me to write. In first grade, in fourth grade, I won the class contest.
In college, my writing professor for poetry and fiction had me stay after class and told me I had the ability to be a successful poet and fiction writer. She liked a poem I wrote about a character in Vermont. I wrote with a spirit of enthusiasm, and was creative in coming up with ideas.

MH: What was your schooling?

I graduated from Greenwich High School in Conn. I received my bachelor’s degree from Southern Vermont College in Communications with a minor in English Literature. I went to the University of South Carolina on a full scholarship to the College of Journalism. There I studied with William Price Fox, who was known to be one of the top fiction writing teachers in the U.S. (He taught with Kurt Vonnegut at the U. of Iowa Writer’s Workshop, known as the leading U.S. writing school.)

During college, I wrote articles for the Bennington Banner in Vermont.

For my first job, I was selected as one of 40 students for the American Society of Magazine Editor’s Internship Program in New York. Upon completion I was chosen as one of three American students by the Vice President of McGraw-Hill Publications as a trainee.

I worked at McGraw-Hill Publications as a reporter, writer and staff editor for magazines, and have also edited published inspirational magazine articles. I wrote and edited many pieces.

MH: What inspires your poems?

My poetry was inspired by the fact that I love to read poetry. On still evenings when snowflakes are falling, or on quiet evenings listening to the brook flowing and to crickets chirping, I like to enter into a poem and to be swept away by its feeling.

For this book, I was inspired by my childhood summers in Vermont. We lived secluded summers working on family dairy farms six miles back on a dirt road working for people whose families had lived there since the 1700s. I spent many afternoons walking up mountains, strolling through meadows and streams. At night, we would walk in the dark down country dirt roads. Writing poetry takes me out into nature.

Writing poetry also gives me warm connections to people. I am sharing my life, and learning about other people. I enjoy reading my poems to groups to do this.

Here is a photo of Steve reading some of his poems to our Shakespeare Club. 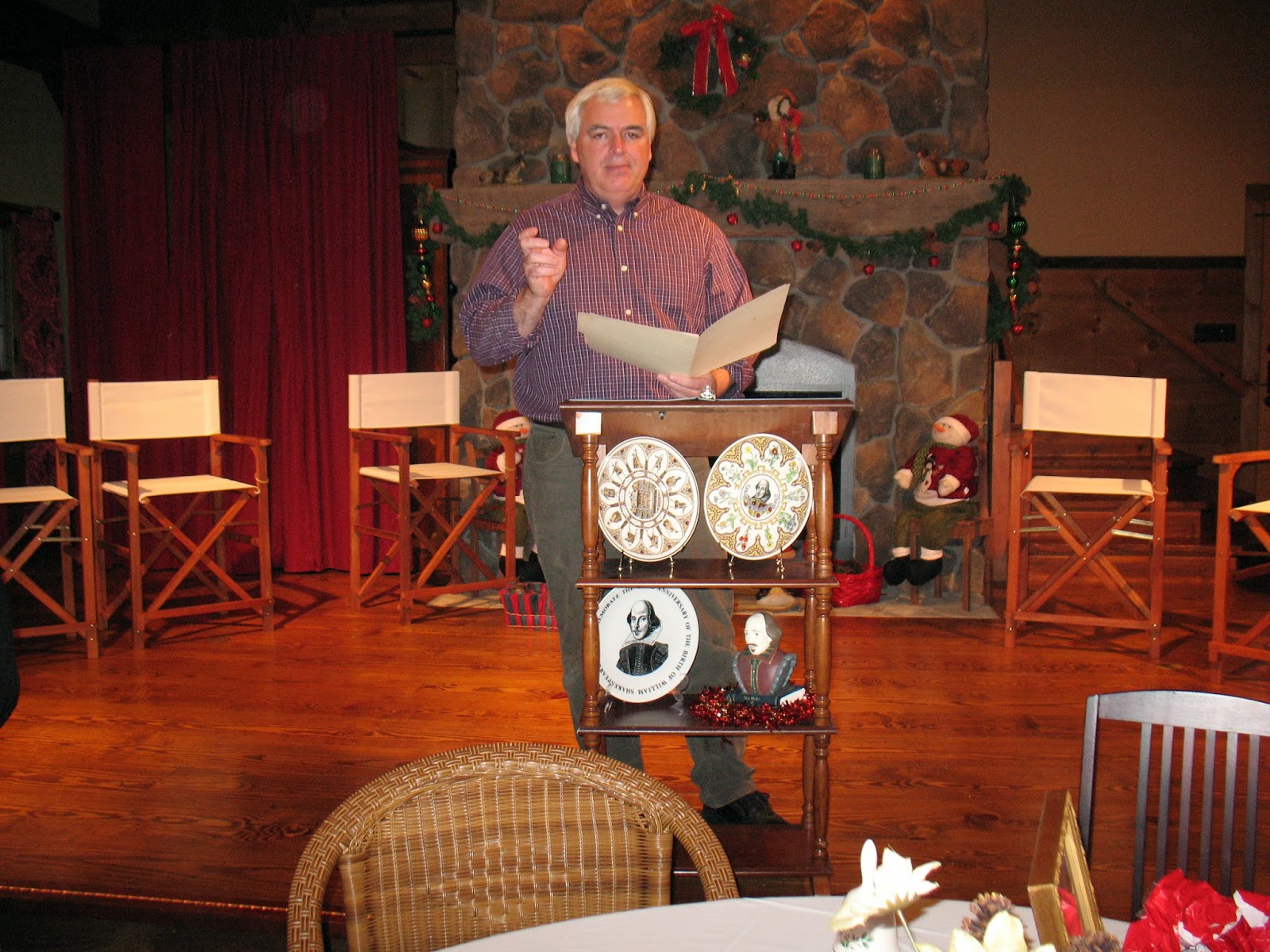 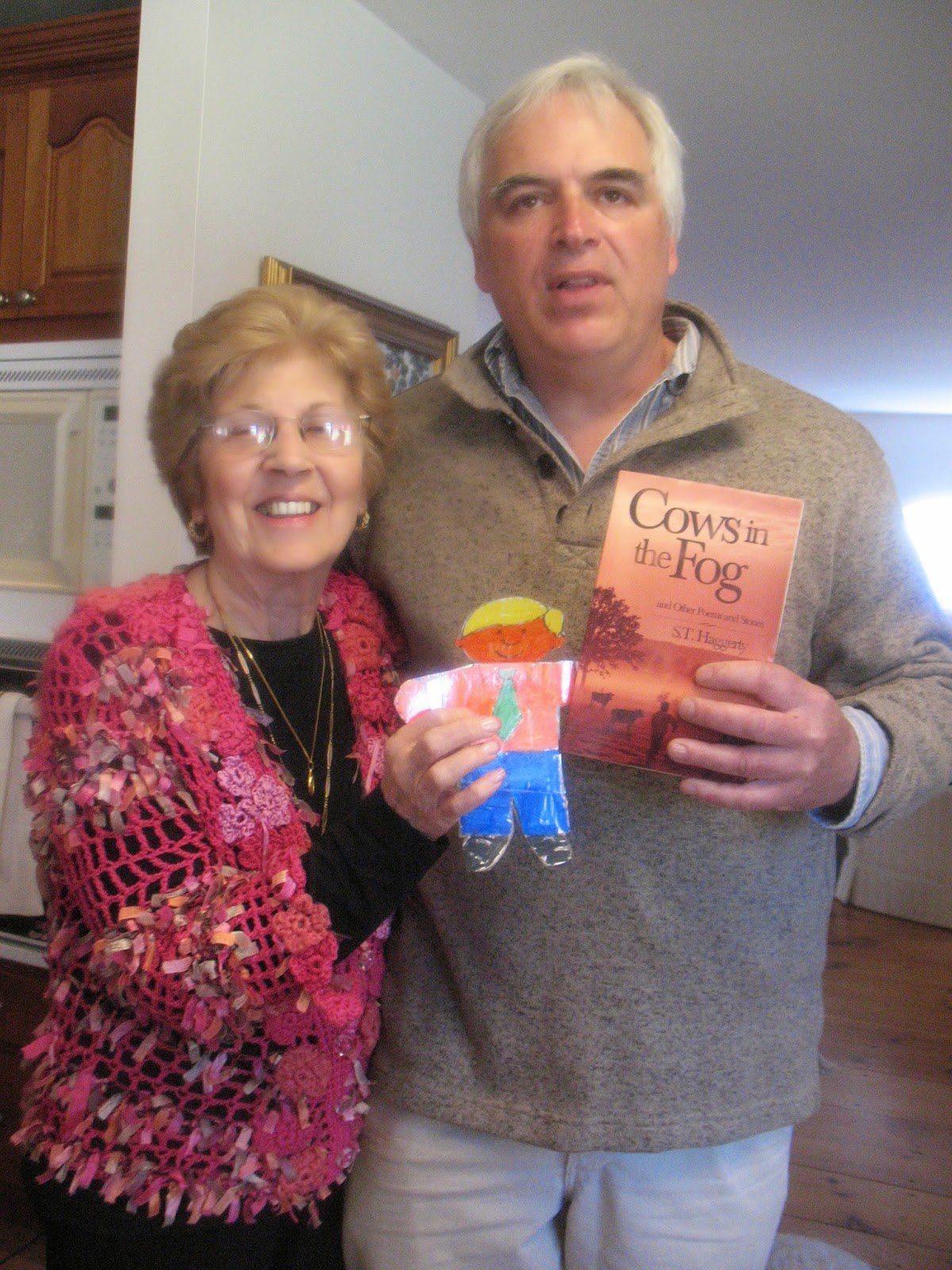 Here Stephen is posing with his new book, and I added my great grandson's visiting flat Stanley into the photo. Steve was such a good sport and got a kick out of it.

Cows in the Fog will be available on amazon.com very soon.

Stay tuned, I know a lot of interesting, fascinating and truly amazing people.

Have a great day,

Posted by Margaret's Hooks and Needles at 8:22 AM